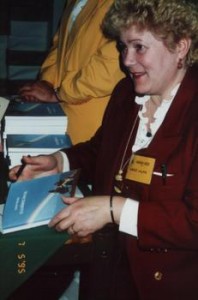 The book originates from Estonia and belongs to a self-help book series (8 books in total) called “A Teaching of Survival” (literal translation from Estonian title) written by an Estonian lady Dr. Luule Viilma who started as an active doctor but soon became very popular as an author of the books.

It all started out of a simple need to explain the basic ideas and connections between the thoughts, stresses and illnesses to all the patients who visited her. First Luule published a little booklet called “Love, Forgiveness and health”, but very soon she realized that she need to go deeper with the explanation, because more and more people visited her with same questions and problems. So at the year 1994 first book – “A teaching of Survival I” was published.

Very soon the books were translated to Russian, Latvian and Finnish. Luule gave lecturers and received patients also in English speaking countries like USA, Canada and Great Britain, but since she didn’t speak English herself, she was lecturing mainly to the local Estonians or was translated by someone who knew Estonian. That is probably why the first and only English edition had to wait until year 1997. “A Teaching of Survival” in English was compiled out of the two original books: first and second in the series.

Perhaps this combination of two books was one of the obstacles why English edition never became so popular as translations to Russian, Finnish or other languages. The book which has more than 500 pages and a few graphics is probably too “heavy” for a regular reader interested in an easy way to get the good health.

These books can be classified as self-help books, with an accent on the spiritual and mental, essentially addressed to people interested in self-help but holding potentiality of arousing attention of a much broader circle of readers. Their main topic is the basic connection between human thoughts, different stresses and illnesses. To our knowledge, there is no similar book in the world which, by using examples from everyday life, explains and interprets different stresses and describes how they lead to specific illnesses. The books are rich in clear and detailed graphs and tables, illustrating those ideas. What is so remarkable about this approach is that it makes a connection between different stresses and their end-result ­– specific illnesses, showing which stress leads to which illness. This is exactly where “A Teaching of Survival” is different from other spiritual/mental teachings. Where the majority of spiritual systems just point out the connection between thoughts and stress, “A Teaching of Survival” aims deeper by offering a detailed system of thought. It deals with the most basic level of the human being – the physical body – and explains the mental and spiritual causes for all commonly known illnesses.

The first book – out of a total of eight (8) books – was published in Estonia in 1994. It gained fast and surprising popularity and beat all Estonian book sales records. The rest of the books in the series were published at a run up to 2004. Very soon the books were translated to Russian, Latvian, Lithuanian, Czech, Finnish, Bulgarian. Moreover, there’s an interest for translating the book in German and Hebrew too. The books are extremely popular in Russia where even some schools have been established applying the same methodology/teaching. Luule herself gave lectures and received patients also in English speaking countries like USA, Canada and Great Britain. “A Teaching of Survival” in English was compiled in Estonia in year 1997 out of the two original books: first and second in the series. The English version that we submit for your evaluation consists of 574 pages with several tables and graphs and it was translated by a native speaker and edited by an English-speaking editor.

Luule Viilma died in 2002. Her family continues to keep and spread her legacy. Our aim is to have all eight (8) books published for the English language reader. We have had lots of positive feedback from all around the world that encourages us to offer the series to a larger circle of readers.